Two Supermarkets Proposed One Of The Biggest Deals In U.S. Retail History

Two major companies merging, could have an affect on grocery shopping in America. 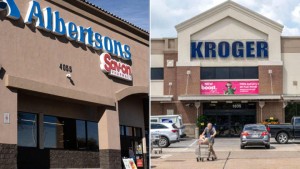 Two major companies merging, could have an affect on grocery shopping in America.

It was announced that Kroger and Alberstons plan to merge. If the proposal is approved, the $25 billion deal would be one of the biggest in U.S. retail history. The merge would be expected to complete in 2024. It would combine the 5th and 10th largest retailers in the country.

The plans were presented due to the companies wanting to be more competitive against non-union giants like Walmart and Amazon. The plan is expected to face intense inspection and is not guaranteed to follow through.