SC Man Charged by FBI for Participating in Capitol Riot 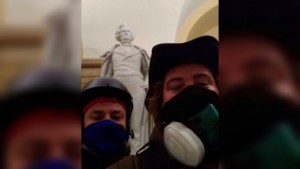 A South Carolina man has been arrested for allegedly participating in the Capitol riot in Washington, D.C. A warrant for the arrest of Andrew Hatley was first issued by the FBI yesterday after they received a selfie of Hatley at the U.S. Capitol. It was sent from a tipster who’d reportedly ‘known Hatley for years’. On Facebook, Hatley tried to deny it was him in the photo but investigators were able to confirm his phone was at the Capitol the day of the riot. He now faces four federal crimes, including entering a restricted building and knowingly engaging in disorderly or disruptive conduct that impedes government business or aims to do so. Hatley could receive up to 21 years in prison if convicted.

Shelters Opened in Horry County for Those Displaced by Floods

A Pick Up and Go Menu at Barefoot Bistro