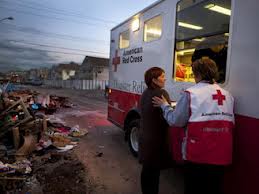 On Monday, November the 12th, 2012, at Myrtle Beach, SCs’ ‘Broadway-At-The-Beach…’ members of the broadcast, and print media throughout Horry County…joined forces, on behalf of the American Red Cross, in a fundraising effort, for the victims of “Megastorm Sandy.” Their dedication and donors, raised $16,400. Our thanks to all… This is part 2 of 2 parts