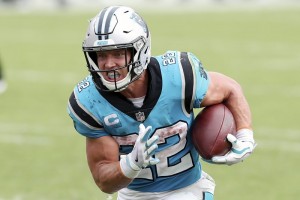 CHARLOTTE, N.C. — A person familiar with the situation says Panthers running back Christian McCaffrey will not play Thursday night against the Atlanta Falcons.

The person spoke to The Associated Press Thursday on condition of anonymity because the team has not announced the decision. The team would have had to activate McCaffrey from injured reserve by 4 p.m. Thursday for him to be eligible to play.

The NFL Network was first to report the decision.

The Panthers were hoping to have McCaffrey back after he missed the last five games with a high ankle sprain, but the team decided to err on the side of caution with the 2019 All-Pro. The decision gives McCaffrey 10 more days to recover before Carolina’s next game on Nov. 8 vs. Kansas City.

McCaffrey had practiced on Tuesday, but was not listed on the injury report because he was still listed on injured reserve.

The injury, which occurred in a Week 2 loss to Tampa Bay, was originally expected to keep McCaffrey out four to six weeks.

Mike Davis will continue to start for the Panthers at running back. Davis tallied 149 yards from scrimmage and a touchdown in Carolina’s 23-16 win over the Falcons on Oct. 11.