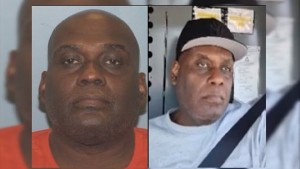 The New York Subway shooter Frank R. James has been arrested. During a news conference today New York Mayor Eric Adams announced “We got him.” 62 year old James was located in the East Village at the corner of St. Marks Place and First Avenue where he was apprehended without incident and taken into custody. The NYPD was alerted to his whereabouts by pictures posted on social media. The Glock 9 mm semi-automatic handgun used in the shooting was purchased legally by him in Ohio in 2011. James has addresses in Wisconsin and Pennsylvania and has 9 prior arrests in New York and 3 prior arrests in New Jersey. James has been charged in Brooklyn Federal Court with terror-related offences and if convicted, he faces up to a lifetime behind bars. During the shooting yesterday, James donning a gas mask and construction vest and hard hat, set off a smoke canister and fired the handgun 33 times inside a Brooklyn subway train and station around 8:30 a.m. At least 10 people were shot including 7 males and 3 females, 29 people including some children were injured. The investigation is ongoing.