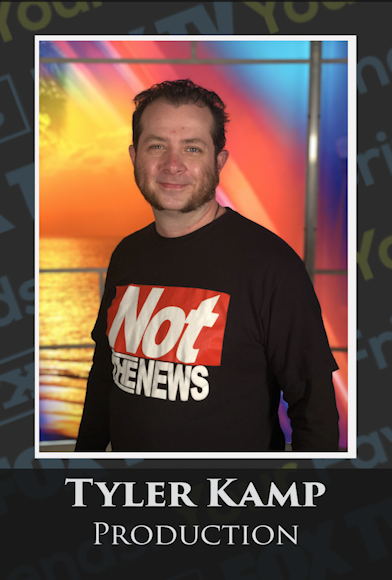 Tyler joined WFXB in 2008. But before that, his career began at the age of 8 when he got his first taste of performing on stage in the Players of Utica’s annual production of Scrooge. From there, there were many more community theater shows and high school productions. In the North Country of New York, at Plattsburgh State University is where he first ventured into radio and television. Studying Mass Communications, he created and was the star of Morning Maddness on 93.9FM WPLT which became WQKE. On the air, Tyler and his crew woke up the campus and surrounding community daily and entertained with stunts, pop culture conversation, comedy & interviews of visiting celebrities. He also was a co host of Campus Talk, a weekly program discussing campus related events and sports. On PSTV, Plattsburgh State Television, he produced a weekly sketch comedy program called Stay Tuned… and hosted the serious talk show, North Country Nightly, interviewing local celebrities, business leaders, and politicians. In addition, Tyler was deeply involved with Plattsburgh State’s Theater Department, appearing on stage in several productions as well as stage directing shows from the wings. Since graduation Tyler worked at The BUZZ, WIZN, WOW-FM & K-Rock on radio and WKTV, NBC affiliate in Utica, NY. Then he came to Myrtle Beach, where he became the Man on the Strand. When he’s not asking people questions, Tyler is watching UFC, NASCAR, & the NFL. Follow on twitter, @NotTheNewsMOTS. Email, ManOnTheStrand@WFXB.com

One in Custody After Incident in Myrtle Beach