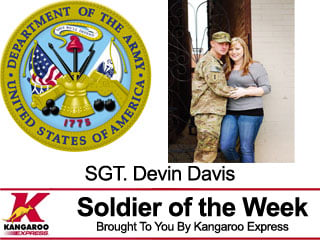 This video is no longer available.

Sgt. Devin Davis, husband of Christie Gray Davis (daughter of Charlie and Dale Gray) of Mt. Croghan and son of Tom and Debbie Davis of Wallace. He was injured in the suicide bombing attack in Khost City, Khost Province, Afghanistan on June 20, 2012. Devin and Christie and their families need your prayers for the days, weeks and months ahead. WCRE and The Link newspaper have established the “Devin Davis Benefit Account” to help pay travel expenses for Christie and Devin’s parents so they can be with him during his recovery. Donations can be made at any First Citizens Bank in South Carolina or online at fundrazr.com

Each Thursday Night on Not the News, Greg and Kristine will profile a different member of our Armed Services currently serving.

Brought to you by