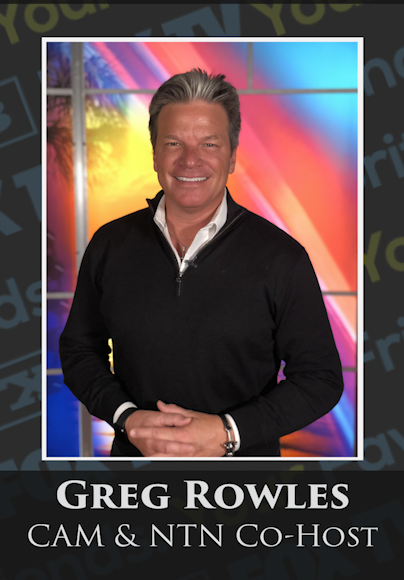 Greg Rowles has spent most of his life on stage and in front of a camera. He grew up in a
musical family performing with his Mom, Dad, brother, cousin and aunt. After graduating
college with his business degree in hand he started a consulting firm for builders and
developers outside of Washington D.C. His passion for music was so strong he gave up the
business after three years and moved to Nashville, TN. There he entertained for three years
at Opryland USA, and that is when Ed McMahon came calling giving Greg a spot on the
legendary show, “Star Search”. Greg appeared on that broadcast for nine weeks and was
named “Male Vocalist of the Year”. Doors opened quickly for Greg after that with a large
agency deal with Buddy Lee Attractions and an immediate live tour. Greg was also asked to
host a couple of television pilots as he exercised another facet of his talents and quickly
realized his love for this new genre of entertainment.

Striking a hot deal in 2000 meant a major move to Myrtle Beach where Greg began starring at
The Alabama Theatre where after 19 seasons he still performs live 6 nights a week singing and
playing multiple instruments as well as holding down the emcee duties.
Over the course of his esteemed career Greg has entertained at the Vatican in Rome, Italy for
three years at the request of James Nicholson, the U.S. Ambassador to The Holy See, who also
served President George W. Bush as Secretary of Veteran Affairs. Greg also performed
numerous times as a solo artist on the Grand Ole Opry. This year marks his 40th year in show
business and his 19th season here where he has been honored to be named as “Alabama
Theatre’s Good Will Ambassador”.

Greg has never been one to let the grass grow under his feet so once he stabilized his family
here in his new hometown Greg began honing his television skills hosting and producing shows
for Beach TV and Time Warner Cable Television locally. It was a mere 11 years ago that Fox
TV hired Greg to launch a new idea to the station where he would host a weekly little night
time tv show.

Greg added to his list of titles, “Award Winning Broadcaster” recognized by the National
Motorsports Press Association. You can see Greg’s work daily on WFXB FOX TV anchoring
“Carolina am”, and “Not the News” daily.

Greg is also known throughout the Grand Strand for his philanthropic involvement having
served as a board member for the American Red Cross Hero’s Campaign, and volunteering
with many organizations including The American Cancer Society Relay for Life, D.A.R.E of
North Myrtle Beach, North Strand Housing Shelter, Horry County Helping Hand, Walks for
Autism, Grand Strand Miracle League, Grand Strand Hospital Clergy, National Day of Prayer
and Gideons.

Currently Greg and his wife Brandee of 25 years are enjoying their family during the
transitional season they are in where their daughter, Courtney has started her own production
company proudly serving her hometown of Myrtle Beach and sons Grayson and Ashton will
graduate North Myrtle Beach High School in June. This new season comes on the heels of
Greg serving over 14 years in Christian ministry as a music pastor and is now consulting with
churches all over the country forming praise services that require production. At any given
time you can catch Greg strumming guitar at one of our fine hospitals to friends and strangers
alike trying to spread some cheer and love of Christ or at the elementary schools where his
kids grew up for teachers who love and teach in their community. Five minutes with Greg
Rowles and you will know his heart, his faith and the things in life that are most important to
him. God first, family second and everything else after that is just icing on the cake.

One in Custody After Incident in Myrtle Beach